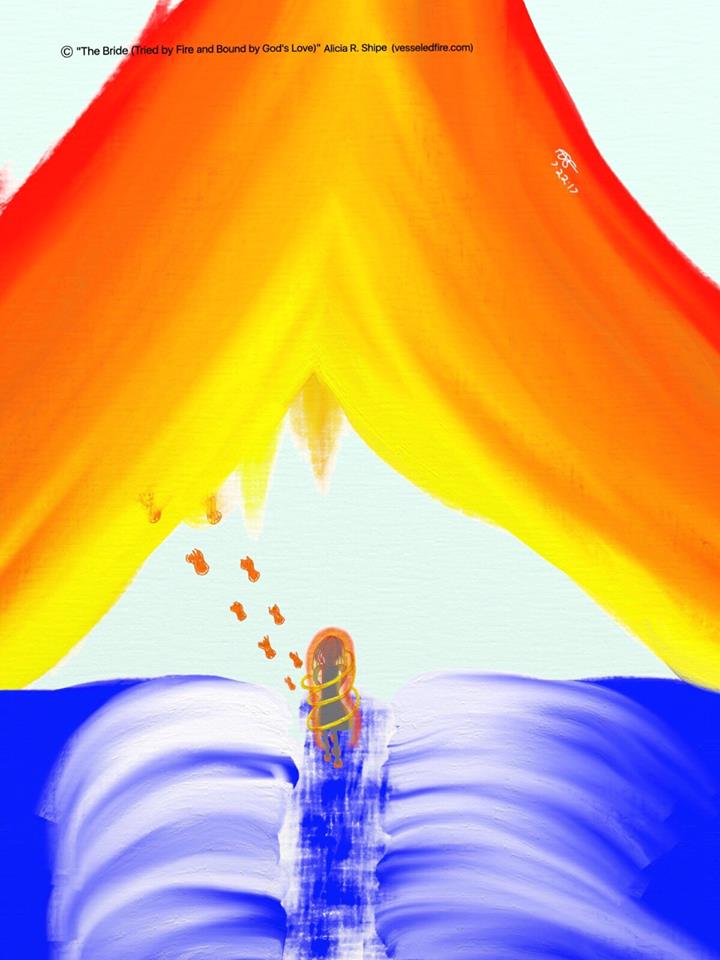 “The Bride (Tried by Fire and Bound by God’s Love)”-Alicia R. Shipe

Notice that Peter said, “…command me to come…”.

To me, that in itself is a bold move to command Lord Jesus to command. Jesus’ reply was “Come.”

How many times have we read the words in the Bible, tried our hardest to apply what we read, went up after Sunday service for prayer (either for helps, confirmation, or affirmation) only to come back home or get back to our routine and forget everything we just encountered? How many times have we been so taken over and overwhelmed by Holy Spirit to be used for the one vs. the ninety-nine only to be stopped by the flesh (either our own or another’s)? We know what happened to Peter in this scene. He almost drowned because his doubt in withstanding the winds came forth. Jesus reached out His Hand after Peter cried out, “…save me…”.

1) Boldness must be coupled with humility. Though the two can work independently of one another, they are designed to work together within seasons of our destinies.

2) Knowledge is not understanding but understanding comes from knowledge. The life of Peter and the comparison to John the Beloved (whom some of us came to grow in the understanding is also John the Revelator) is a great study to begin the relationship between humility and boldness. The New King James Version says the winds which brought on Peter’s doubt were “boisterous”. “I bet you I can…”; “I bet you I’m better than you…”; for the bullies – “Watch how I make her/him fall…”

3) Fear is a real emotion. Unlike Love yet similar to, it forces us to assess and gain access to those issues (even when they are not our own but from others) God cannot touch until we become aware (conscious) of them. Never wake a sleep walker especially when engaged in a nightmare.

4) We cannot know what we will or are able to become without the thought of such passing through us first. After the thought comes the trying. After the trying comes the failure of success and the success of failure. For us believers, this is learning when, where, how, why, and what commands of our Lord, God, and Spirit are for our personal whens, wheres, whys, whats, and hows (which is all and every by the way). When the winds are boisterous, it is a sign for us to come to an understanding of how to be silent for the calming. The winds didn’t calm in this scene until Jesus and Peter got in the boat.

I have a few night visions (dreams) of warning a group of people of things to come. With almost everyone I myself am also warned that no one is listening. The reality of knowing my giftings but not being acknowledged (especially by those who are supposed to know better and teach others) is beyond maddening and frustrating. I cannot continue to sulk in this version of other’s lack. Last night/this morning was no different.

In my dream I was at a familiar church. There was a mother who was trying to be a worship leader. We all knew that was not her role no matter what affiliations she may have. Though this individual shows a calming demeanor, an attitude was seen in my dream that can only come with true discernment. She was quite dominating in this need to have whatever the situation was with the worship to be perfect. I had to leave to not be under this and just to clear my thoughts. As I left, it started to rain. Individuals that had left this church were on their way back. I had a dark blue umbrella, thankfully, because the rains were becoming heavier. Though I was still on the grounds, I was miles away from the multitudes. There were many green, plush, tree filled hills I had to walk through.

When I finally came to a clearing, there was a stream. This stream was close to the entrance. Though I walked forever by appearances, I barely went anywhere. There was an empty notebook and a report cover with personal items in it. I bent down with elation to grab these items from the rocky stream and the rain began to lift and light began to shine forth from the hovering clouds. I didn’t go back in the church but could view the Wonder on other’s faces as they did as well as some carrying remorse within themselves for past thoughts and actions.

Most times when a prophet tells a story like the above, many in the path often ask, “Was it me in her dream?” or “Ooh, I bet I know who she’s talking about.” DON’T! There is no good that will come of it. I shared this dream, partly, for my own benefit. I also shared it as a means for others to “Be of good courage!” This dream is a personal admonition to myself for my destiny and immediate charge but it serves as a warning to anyone willing to pick it up. The humility is in the action of taking the time to discern the personal. The boldness comes in the speaking forth and allowing Holy Spirit to work His will through our faith (no matter how small or big we believe that may be).

My prayer is that during these natural and spiritual rains we are coming under and are currently under, we learn that ‘I am me’ and ‘you can’t be me’ nor can I be you. The spirit of control is and has for too long disguised itself as the spirit of counsel through the falsity of the spirit of worship. May we learn to know before lack of understanding can have a foothold again to understand where we sit and where we stand. Most importantly, may we come to a trust that settles beyond any flesh or blood (take the time on that last part). God is not new but what He is doing we have not allowed ourselves to comprehend outside of being told by “man” how, what, and when to accept. Selah and Shalom!

Laden – heavily loaded or weighed down

Matthew 11:25-30 – At that time Jesus answered and said, “I thank You, Father, Lord of heaven and earth, that You have hidden these things from the wise and prudent and have revealed them to babes. 26 Even so, Father, for so it seemed good in Your sight. 27 All things have been delivered to Me by My Father, and no one knows the Son except the Father. Nor does anyone know the Father except the Son, and the one to whom the Son wills to reveal Him. 28 Come to Me, all you who labor and are heavy laden, and I will give you rest.29 Take My yoke upon you and learn from Me, for I am gentle and lowly in heart, and you will find rest for your souls. 30 For My yoke is easy and My burden is light.”

What are your thoughts? Cancel reply

This site uses Akismet to reduce spam. Learn how your comment data is processed.